Thomas Dunn appears to have been better known to the early residents of Vancouver as Tom. His full name was Alexander Thomas Dunn, and he was born in Edinburgh, Scotland, in 1852, moving to Victoria in 1883 and Vancouver in 1886. Jonathan Miller was nearly 20 years older, born in 1834 in Middlesex, Ontario, arriving in Granville (the precursor to Vancouver) in 1865 via the Cariboo gold fields. The two are linked in Vancouver for their decision to develop two linked, but technically separate buildings known (unsurprisingly) as the Dunn-Miller Block.

Tom Dunn was a hardware merchant; he started working for Douglas and McDonald in Edinburgh’s Grassmarket in 1869, staying there for six years. He sold hardware in England for two years, and arrived in Toronto in 1876, working for seven years again selling hardware before arriving in Victoria in 1883. In Toronto he had married and his first son, Thomas, was born. Seven more children followed, with the last being born in 1896. 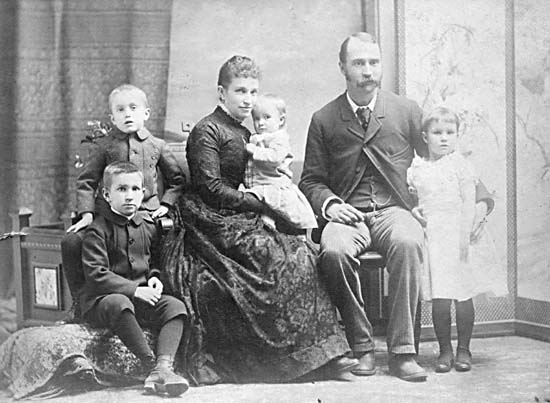 He arrived in Vancouver in February 1886, and set up his hardware business at Powell and Carrall in A G Ferguson’s building. Four months later he lost everything he owned in the fire that destroyed the city (his losses were valued at over $2,000 – including the piano that had just arrived from Victoria).

He quickly rebuilt – he was said to have been the first store open after the fire – and soon moved to new store on Cordova Street.

He also had a house built, also on Cordova Street (although in those days it was called Oppenheimer Street). The house still stands, and is said to be the oldest in the city that can be dated with any accuracy. These days it is part of a Catholic Charity. 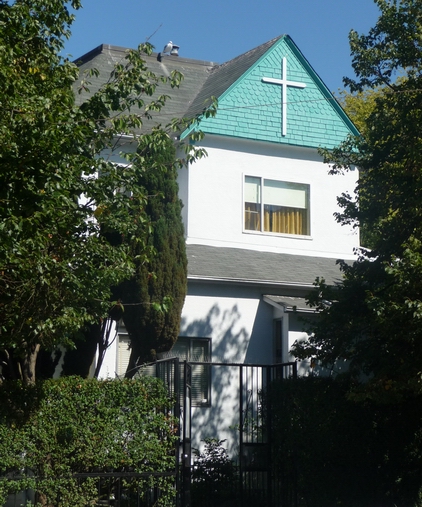 Business continued to boom as the new city built out fast, and in 1889 the new Dunn family home “Earlscourt” was completed in the developing West End, on the corner of Georgia and Thurlow. N S Hoffar was the architect, and he was also hired to to design the Dunn-Miller Block that housed the retail component of the Dunn business.

Four years later William Blackmore designed another Dunn Block, this one on Granville Street at Pender, completed late in 1893. (It was demolished in 1949). N S Hoffar was once again the architect of a new a warehouse at Alexander Street, the Dunn Block, completed in 1899.

This building housed the offices of the Union Steamship Company for several decades. As the Klondike Gold Rush faded Tom Dunn sold the building to Boyd, Burns and Company Ltd., dealers in engineering and mill supplies.

In 1909 Tom decided to move to Prince Rupert which was seeing a similar boom to early Vancouver, but in 1912, for the sake of his wife’s health, he moved to San Diego, leaving his eldest son in charge of the business. He died three years later at the end of 1915, his wife four years after him in early 1920.

Jonathan Miller had a more eventful past. For a start, he had a series of almost entirely unrelated professions. Married to Margaret Springer (his cousin on his mother’s side) in 1856, aged 22 – in the same year he was appointed a Justice of the Peace.  Two children were born before Jonathan starting out from Ontario for the west with his brother-in-law Ben Springer (see Springer and Van Bramer). He worked in a store in New Westminster, and was elected to New Westminster council in 1864. One account of his life has him joining a crew looking for a route from Bute Inlet to the Cariboo Gold fields, narrowly avoiding an Indian massacre.

By 1865 he was in Burrard Inlet, logging what today we know as Stanley Park, many of the ‘skid roads’ have become the park trails. His wife and family joined him from Ontario and he had two crews logging the area until a dispute with Captain Stamp, operating the Hastings Mill, led him to move on and farm in the Fraser Valley. (Captain Stamp initiated many legal actions – he seldom won, but that does not seem to have deterred him. The fact that Jonathan Miller cut logs for the rival Moodyville Mill may not have helped relations with Catain Stamp.).

In 1871, with Stamp no longer running the mill, his replacement, Captain Raymur along with Sewell Moody the owner of the north shore Moodyville mill and Jack Deighton, the Granville innkeeper all petitioned the Provincial Governmernt to install a constable to deal with the fast-developing and often lawless town. The existing ‘law’, an Irishman called Tomkins Brew was living with his native family at Brockton Point and his policing methods (reported to consist of snoozing on a veranda, his white beard blowing in the breeze) were deemed inadequate.

A New Westminster magistrate appointed Miller as constable (Brew was named customs collector), the government confirmed the appointment and built a Court House, police station, jail and residence (albeit one small building serving all those purposes) on Water Street. Another constable was later appointed to double the police force.

Jonathan Miller in around 1886 - BC Archives

In 1872 Constable Miller got his name in the news. Two boats are spotted approaching Granville, apparently filled with settler’s belongings stolen from along the coast. Seeing the interested constabulary (Constables Miller and Handy) the two men in the boats, named Brown and Shipley, head out into the harbour. The police slowly pursued them, and found them at night on the beach at Jericho (believed to be named for logger Jerry Rogers, via Jerry’s Cove to Jericho). They discharged their rifles at the police, who returned fire, injuring one of the men. Thet escaped in the darkness, although the police retrieved the stolen goods. This being a slow news year, the local newspapers called it ‘The Battle of Jericho’.

His policing was obviously considered satisfactory, as Jonathan Miller held the job as Granville grew and the city of Vancouver came into existance. On incorporation Miller was named Returning Officer for the election, and despite suggestions that several votes were ignored while others appeared more than once, a mayor was elected. Turning down the role of Chief Constable for the new city, Miller was appointed Postmaster, a role he would hold through into the 20th Century. When the fire consumed almost everything he owned a few months after his appointment, Miller ran for the mill (which was not burned) carrying the post-office cash box with his spectacles balanced carefully on top. That was all he saved. His wife and family also escaped, his wife with nothing but her prayerbook.

When the city rebuilt almost overnight, the Millers joined in the action. The family moved to a fine house on the city’s west side, on Burrard Street. Along with other respected citizens including Ben Springer, Miller was an officer of the Vancouver Electric Illuminating Co Ltd. He also acquired some land on Cordova Street, and by 1889 was ready to build a sizeable investment, partnering with Tom Dunn.

The Dunn-Miller Block was by no means a straightforward development. For one thing, there were two clients. While Jonathan Miller owned his part of the site, Tom Dunn was a tenant. Mrs Emerson Lougheed, daughter of Chales Paull the landowner later recalled “Our home was on what is now Cordova Street, where the Dunn-Miller Block is. Mother leased our lot, sixty-six feet, next to the corner; Jonathan Miller’s lot was next to ours. Mother leased our lot to Thomas Dunn, the hardware man, for one hundred dollars a month for fifty years; that was in 1889; then when the Lonsdale people took it over, we sold in April 1912, the sixty-six feet for thirty-five thousand dollars. I don’t know what the Millers got for their lot, but we got $35,000 for ours.” As well as the family house there was a fruit and vegetable business for R V Winch. Edward Baynes of contractors Baynes and Horie recalled getting his first work in the city helping demolish the buildings and clear the site.

As this ‘Daily and Weekly World’ Illustration shows, the building wasn’t completely symetrical – but it was so grand that wasn’t really obvious. In its early days tenants included a subscription Reading Room, the city’s first synagogue, the Knights of Pythias and the Vancouver Electric Railway and Light Company (in which both owners had an interest). The building was sold in 1912 to Arthur Lonsdale, who added his name to the building. He had made his money holding the mortgage on the Moodyville mill, and foreclosing on it in the 1880s, picking up a valuable chunk of North Vancouver in the process.

More recently the Army and Navy Department store moved in following a refurbishment in the early 1970s – the last time it had serious attention. 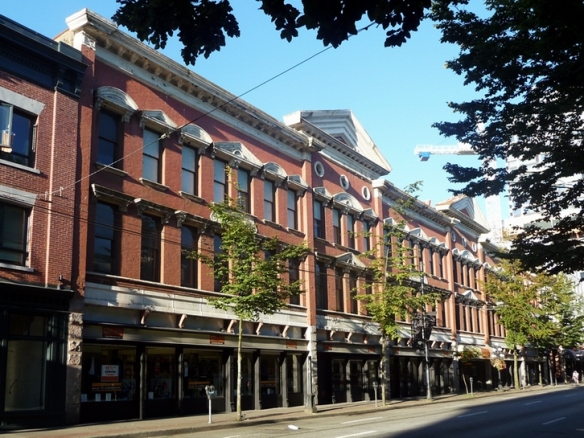 While postmaster the Millers moved out of the Downtown in 1895, to a full city block at Birch and Alder Streets in Fairview where Jonathan was able to give full attention to his hobby – breeding and training race horses. His wife died in 1906, but he didn’t retire from the position of Postmaster until 1909, aged 75. After retirement Jonathan Miller moved to Long Beach in California.  Following a massive stroke in 1914 he returned to Vancouver to be looked after by several of his ten children before he died in the same year and was buried in Mountain View cemetery with his wife.